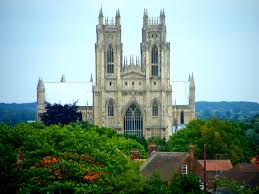 to create a new diocese. After a long process, the proposals to dissolve the dioceses of Wakefield, Ripon and Leeds, and Bradford, and to create a new Diocese of Leeds (West Yorkshire and the Dales) were approved overwhelmingly. Though I have never served in any of them, I’ve done lots in them, and grew up in Bradford, my sponsoring diocese.

I warmed to the obvious mission emphasis in the proposals. Structures don’t do mission for us, but they can hinder it, and this reshaping will allow deaneries, archdeaconries and episcopal areas in the new diocese to relate more easily to the demographics of the conurbations and the Dales.

I’d like to add a small voice into the debate about what happens to the three cathedrals of the former dioceses. There was understandable concern that one new diocese would need just the one cathedral, and that two of them would therefore lose their status (and the funding they received from the Church Commissioners). Not so, and the fear expressed by the three cathedrals that removing their status would ‘disable their local mission’ has been somewhat allayed. They remain free to pursue their ‘engagement with civil society and with those who are not regular churchgoers’ (both quotations from a background paper – GC 1049B).

The new Diocese of Leeds will have a Diocesan Bishop of Leeds, and Area Bishops of Bradford, Huddersfield, Wakefield and Ripon. It will have three cathedrals – seats of the Bishop’s ministry – in Ripon, Wakefield and Bradford. There is provision for Leeds Minster becoming a ‘pro-cathedral’ if desired. Four of the five areas will therefore have a cathedral or pro cathedral as expressions of episcopal ministry and mission, but Huddersfield won’t. The report talks about the difficulty of deciding on the relative importance of Dewsbury Minster, Halifax Minster and Huddersfield Parish Church, and decides that not having a central church here reveals the diversity of the diocese.

Here’s the thing. I’ve worked in a cathedral, and am now in a massive Minster church, and have been reflecting on the similarities and differences of their ministries. I don’t think that the reasons cathedrals are a success story in mission terms (35% growth in recent years) is because they have complex constitutions and legal structures, Chapters, Colleges of Canons and Councils and orders of precedence. Cathedrals have grown because they have a clear mission, a recognition that their ministry is regional and their mission is to the structures of society, and because the wider church recognises this, gives them money and requires them to have at least three experienced clergy there full time.

All of this can be true of ‘greater’ churches at the heart of their area. Beverley Minster cannot help but engage with the East Riding, just as Holy Trinity Hull does in its city. The Bishops of the Diocese of York, specifically the Bishop of Hull, use us and other larger churches to express that regional mission. Most of the things I did at York in welcoming the region to worship (the Legal Service, Remembrance, civic services, military commemorations, charity services and so on) happen at Beverley. You don’t need a cathedral constitution to do that.

But you do need a vision, resources, and the staffing. A new diocese could have a new vision for those churches of its region which naturally have a ministry beyond the parochial and which can express the mission of the diocese focussed in the ministry of the bishops. It could give them titles – ‘Minster’ – which  express this ministry, and ensure that the lead cleric is recognised as also embodying it. ‘Provost’ was what the lead cleric at Beverley was called until the Reformation. Crucially, it could ensure that such staffing was in place that worship, pastoral, mission, social and educational needs were met.

I have a nightmare that the joint working of the three current cathedrals in relation to each other and to their diocesan and area bishops will be so complex constitutionally that the mission of each disappears into the mire of the re-written statutes. One cathedral, with ‘greater’ Minster churches adequately staffed and with much lighter governance could be a superb and flexible mission resource, as long as the current high regard in which they are held is translated into regard for their ‘Minster’ status.

The Measure which will make the new Diocese is wisely light on what it says about how the cathedrals will work. But the background material says that cathedral ministry should be renewed at some time in the future.

An offering then from me. A church which expresses the ministry of a diocese, focussed in the Bishop’s mission, does not have to have the panoply of a cathedral’s constitution and statutes. But it does need a recognition by the diocese that it is a church of regional influence, and needs to have staffing which enables that influence to bear fruit. It needs the status that titles can bring, and it needs the support of the parishes and deaneries around it. Elements of that work here. I’m looking forward to seeing how a new diocese might find a new way of expressing its local, regional and diocesan life. Exciting times.